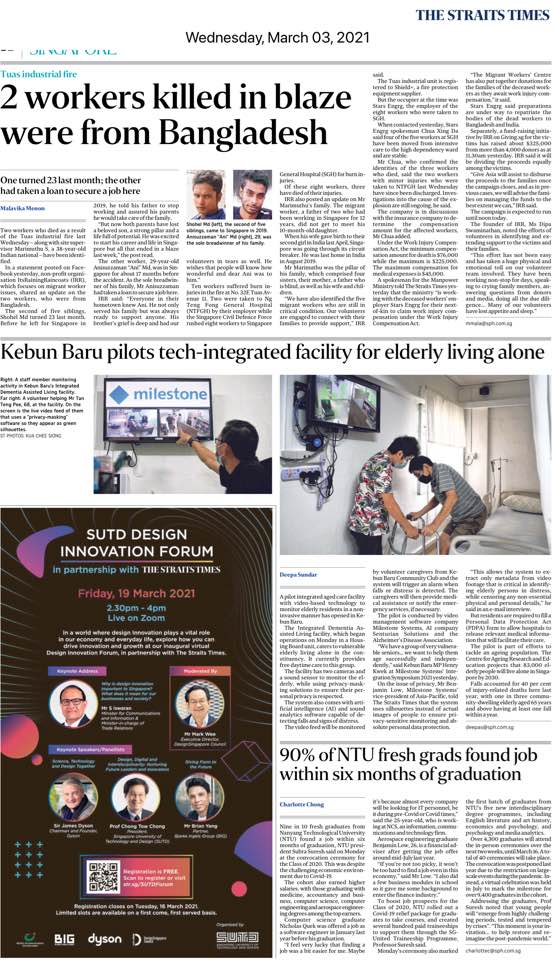 90% of NTU fresh grads found job within months of graduation.

All three stories have so much wrong with them that I wonder if the newsroom is being run by interns.

Bangladeshi workers: I would have thought any self-respecting media would attribute the names to the company spokesman, rather than pick up from a FB post and then confirm. Even if this were the case, the FB post should be used as a ‘tip off’ so that it doesn’t come across as lazy reporting. Might as well give us URL.

Kebun Batu: so there is this wonderful pilot who integrated aged care facility (which is what? Why facility? A room? A programme?) with video-based tech (so not video) and non-invasive (even though video). I still donno who runs it – the CC ? The TC? The CDC? How did whoever get a flat to do this? From HDB?. And all this talk about no personal details etc..fact is, some of monitoring got to be in the toilet even for silhouette. And did nobody even asked the elderly involved or their caregivers what they think of this??? Surely that’s the voice we need in this report.

NTU: Nine in 10 got jobs in intro. Did he say nine in 10 which became 90 per cent in headline ? Or just nine in 10 which could be anything from 85 to 95 per cent? And more importantly, FULL-TIME jobs or not? Don’t think universities should be chary about giving details. Also, wasn’t there a breakdown among universities in that last salary survey?