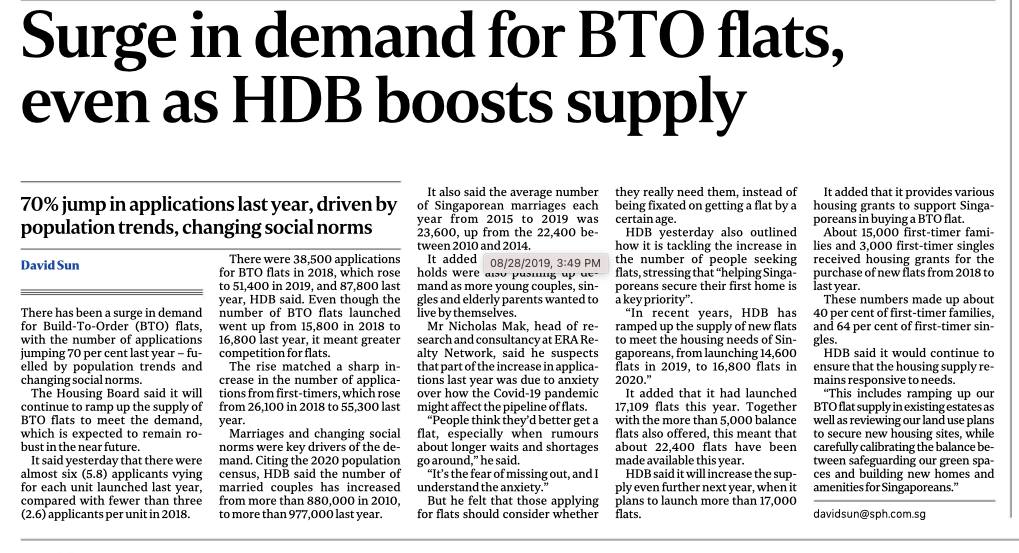 Bear with me. This is a long post. I have put the print version and gave the online URL as well so you can see the before and after process. I am angry enough to spend some time on this because, seriously, readers deserve better.

It’s about a Monday story. I didn’t post anything at all about the news on Facebook because I read the front page of The Straits Times and gave up after reading the first few paragraphs.

Beyond my personal irritation over news stories that begin with “There has been’’, there was this “jump of 70 per cent’’ in applications that I can’t make sense of. What were the absolute numbers last year and the year before? Without saying what the base numbers were, the article immediately jumps to giving HDB a voice about ramping up supply.

Then came a confounding set of figures which I thought was an elaboration of the 70 per cent. It said there were six applicants per unit last year, compared to three in one the year before. So demand per flat doubled? Or did the ST do some mathematical somersaults to get 70 per cent?

Number dumping followed: It gave number of applications over three years. Take out a calculator and you’ll find that 70 per cent refers to the jump from about 51,000 in 2019 to 87,000 last year.

I worked this out much later in the day when I got back to reading. I always read the print version in the morning first in the expectation that editors would have gone over the articles with a fine-tooth comb, unlike the draft stories that appear online earlier which are usually cut-and-paste versions. This was the page 1 lead story as well.

Given the headline which states that this demand was happening “even as HDB boosts supply’’, I looked for how this had been done. The implication was that HDB tried – so how hard did it try? If you read further, HDB “ramped up’’ its building programme from 14,600 to 16,800. And there will 17,000 this year. Those are pretty small absolute numbers compared to the demand.

I remembered that there would be an online version of the story, so I checked that. https://www.straitstimes.com/…/demand-for-build-to…

It had a straight-forward headline.

It gave the figures on applications and went on to say that “the number of BTO flats launched, however, did not keep up with demand, with the gap increasingly widening over the last three years’’.

This looked to me like the real story. In fact, the online version had a nice graphic reflecting this widening gap. Go look.

Both stories went on to talk about the reasons HDB gave for the demand – rising number of marriages as well as smaller household sizes. I don’t want to get into the details of how messy the numbers were because they were in averages and had different years as bases. I won’t even talk about how not all first-timer applicants got a unit, much less second-timers.

But I want to point out that one piece of information was conspicuously missing from the print version.

//The monthly household income ceiling for eligible households has been raised in recent years.
Since September 2019, the income ceiling has been raised from $12,000 to $14,000 for families, and from $6,000 to $7,000 for singles.
As at December last year, there have been more than 7,500 applications from families and 360 applications from singles who would not have been eligible previously.//

Isn’t this a relevant factor raising demand? It makes me wonder why the income ceiling was raised when it was evident even then that HDB cannot keep up the supply. In fact, it is clear from the above that about 8,000 previously ineligible people have now joined the race, competing with households of lower income.

Instead, the print/edited version of ST had an expert weighing in on why demand was high and the rather irrelevant point about how HDB provides grants, rather than focusing on giving the full picture of the core story of demand versus supply.

It wasted many words on how HDB was tackling this problem, when it seems to me that 17,000 units this year is too paltry a figure to clear any backlog much less cater to even more married couples. ST should actually do the statistics on past BTO applications this year and show some reporting.

I looked at the Business Times version as well and realised it was a duplicate of the ST online version. Except that its own headline was more befuddling:

Afternote: 70,000 is demand minus supply. Pity the story doesn’t explain this but picked up from ST. So headline writer did the maths but didn’t re-write copy