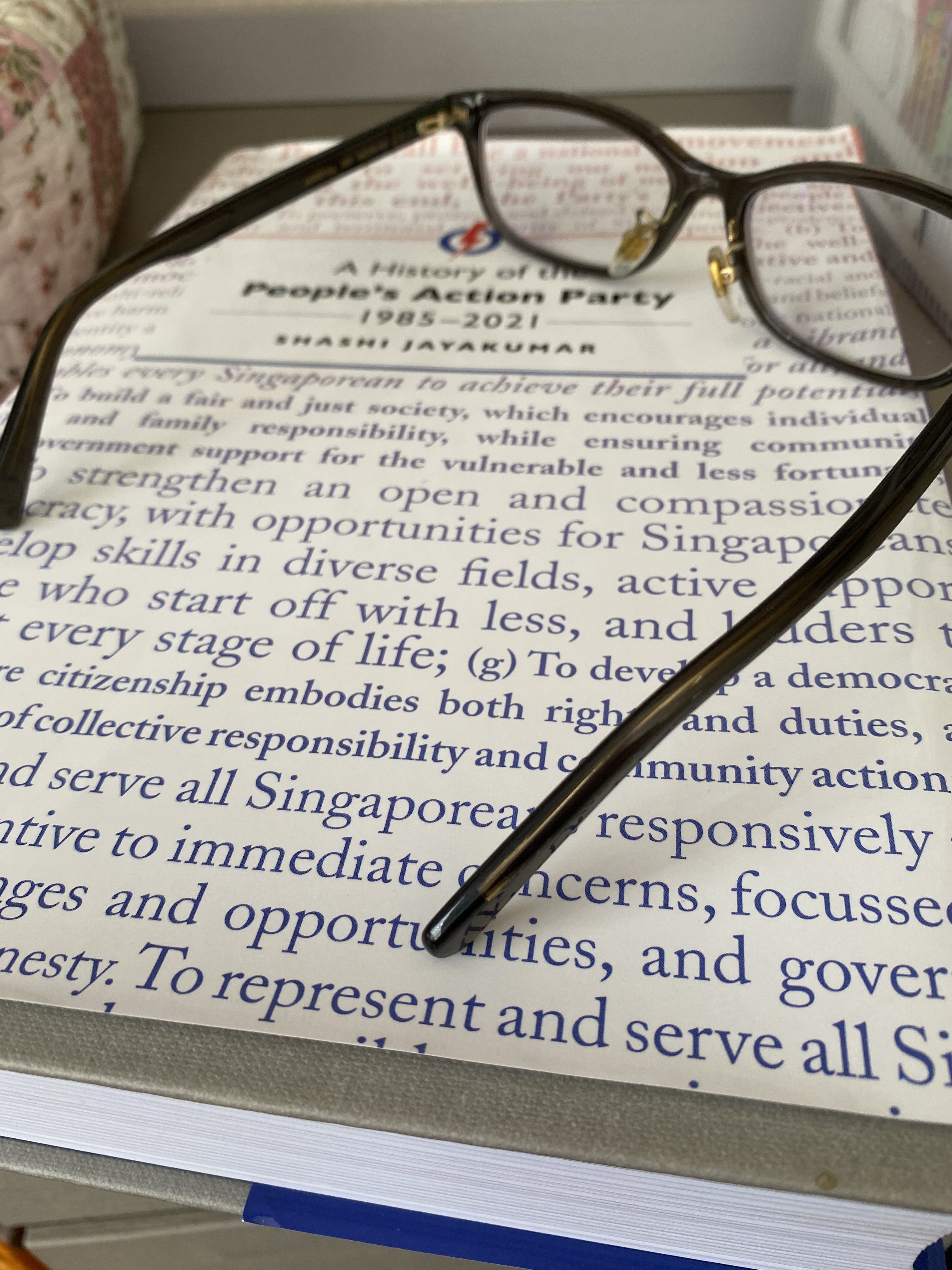 Don’t get turned off  by the thickness of the book. Close to one-third of the 782 pages are taken up by footnotes, bibliography and appendices. Not that they are all boring. Some gems can be discovered there, because Professor Shashi Jayakumar seemed to have quite a bit of access to private letters, memos and minutes and reports of meetings of the People’s Action Party Central Executive Committee. He even recounts anecdotes from interviews with PAP stalwarts, both serving and ex-MPs, in the bowels of each chapter.

This book is different from the many Lee Kuan Yew memoirs which speak of the development of Singapore from Third World to First, its vulnerabilities and the difficulties of nation building in the early years. While the PAP’s founding and subsequent hold on power have been well-documented, not much has been said about its more recent history.

Dr Jayakumar started from 1985, the year after the PAP lost two seats in Parliament and which started an intense period of party soul searching. The party had atrophied (my words) and a quick succession of task forces were formed which resulted in the formation of its youth wing, women’s wing and later, HQ committees and policy groups. Many papers were produced for discussion by party members over the years, and most were scathing about the party’s ability to connect with the voters. It showed a side of PAP I didn’t expect – capable of taking hard knocks but behind closed doors.

While Dr Jayakumar covered plenty of ground in the years after 1985, his archive of notes on the party was thinner for the years in the new millennium, bereft of private documents and reliant more on an analysis of material in the public domain. For example, his last updated figure for PAP membership figures was 35,000, in 2005. And cadre member numbers stood at 1,800 in the same year.

I don’t know if I am in a position to verify the “newness’’ of facts and opinions. This is a book by an academic, not a journalist who would have presaged revelations with “disclosed’’, “revealed’’ and “for the first time’’.

So, relying on my memory bank, past reading and a bit of googling, here’s a few things that I didn’t know from the LKY days.

It’s a good story which has captured imaginations – how the 2G leaders gathered at Dr Tan’s house on Dec 30, 1984 and decided on Goh Chok Tong as their leader. Mr Goh came to the dinner late and they popped the news to him, so the story goes. But Dr Jayakumar disclosed that Mr Goh had handed then-PM Lee Kuan Yew a list of his Cabinet line-up the day before, with himself as First Deputy Prime Minister. It seems that some decision had already been made, or Mr Goh felt the need to impress on Mr Lee that he had the support of his generation.

When it came to Mr Goh’s turn to hand over the reins to Mr Lee Hsien Loong, Mr Goh wanted to institutionalise the process of succession for future generations, the author said. His method – for ministers to present their nominee to the caucus of MPs, who could put up other names if they wanted to. If there were no other names, the nominee would be presented to the CEC for approval. It doesn’t look like this is happening given that PM Lee has made it clear that the decision was for the 4G generation of leaders to make.

Yes, those of us who are old enough know that. But how deep did that animosity go? One anecdote in the footnotes told of how Mr Lee was so incensed that Mr Jeyaretnam had been invited to an MPs’ dinner in 1982 that he ticked off the organiser, the late E W Barker, for “fraternising with the enemy’’. He ordered ex-MP S Chandra Das, the only non-Chinese at the table, to move to another table, saying that he intended to speak only in Mandarin.  Mr Jeyaretnam, then Anson MP,  sat down for a while at the table before leaving.

As PM, Mr Lee had made several assessments of his ministers, ranking Dr Tan first and Mr Goh second. In August 1988, he made the assessment known at his National Day rally, and a week later, he reiterated it at a party convention. Then minister S Dhanabalan said such “periodic school report cards’’ do not help Mr Goh’s credibility while minister S Jayakumar, the author’s father, said everyone he had spoken to  was upset by the “unfair’’ and “unkind’’ remarks. The author said that Mr Lee also wrote to the ministers, telling them that he would be at a university seminar where he would be asked to give his assessment again. (That was intriguing to me as a journalist). He stuck to script but veered off again during question time. Mr Lee later painted his remarks on Mr Goh as a gambit to shore up his successor’s credibility.

The author has intense admiration for Mr Lee, tracing almost every single political development to the man. His far-sighted vision concerning the stability and harmony of Singapore, as well as the longevity of the PAP, had resulted in innovations such as the Group Representation Constituencies and the elected Presidency. Mr Lee knew he couldn’t hold back the tide of the times which had a more questioning younger electorate, even among the PAP ranks.

By 1984, PAP activists were already chafing at their lack of involvement in higher-level policy-making. Their work was mainly confined to helping out at the Meet-the-People sessions and bringing in the vote every four or five years. Under the command of Mr Goh, then First Assistant Secretary General, attempts were made to build its membership base with new structures and organisational changes in the mid to late 80s. Over the years, entry into cadre positions was modified to give the MP more say on who got to be a cadre. Elections started to be held at regional levels for party positions. The command centre was ceding control, in very limited ways.

Dr Jayakumar also gave more insights into how the Central Executive Committee elections changed over the years, with more say given to the rank-and-file on who got to be nominated. But the CEC would still retain control over who got to be co-opted into the CEC, whether he or she was on the nominated list or not.

Dr Jayakumar was silent about how the positions in the CEC itself was distributed. Clearly the secretary-general was all-powerful; not to be ousted in any putsch by CEC members. Mr Lee himself only gave up his position when he felt that Mr Goh was ready – and that was two years after Mr Goh became Prime Minister.

This kind of regulated loosening in the PAP somewhat mirrors the developments on the national front, with members’ constant calls for more active participation in policymaking. Policy forums and task forces were formed but most projects seemed to lose steam over time. Nor was there a concerted effort over the years to shore up its online activities, or deal with anti-PAP elements who were crowding the social media space. The picture projected was of a political party which constantly needs a reboot, usually after a not-so-good election.

I wish that Dr Jayakumar, who started the book 10 years ago, had spoken to more PAP members (or ex-members) for input. He didn’t, for example, speak to Dr Tan Cheng Bock, a former PAP CEC member who now heads an opposition party. Most of his interviews were conducted before 2015, which probably accounts for how the book suddenly segued into a narrative of national events and policy announcements backstopped by the aftermath of the 2020 General Election.

In my view, it also demonstrates a schizophrenic element in Singapore politics. Is the PAP a political party, or is it the Government? Dr Jayakumar said that party leaders have themselves tried to see if a distinction can be made, or whether it was even needed. Hence, the knotty issue of the loyalty of grassroots bodies which elected opposition MPs have no control over despite their immense influence on the ground.

Dr Jayakumar tried to do a lot with the book. It is as much about unearthing unknown facts about the PAP as an analysis of policies and direction changes by the Government. He was decidedly moderate and very selective in his choice of words, in a bid, I think, to ensure that the book would not be read as an “assessment’’ of the PAP in recent years, but as a factual narrative.

“Deep thinking’’ is a word that threads the book: how the genesis of most policies go much further back and have been thought through and refined in various stages. The introduction of Workfare in 2007, the predecessor of the Workfare Income Supplement, is a key turning point for the PAP (or is it the Government?), when it decided that it needed to intervene to increase incomes for the poorer households. Over the years, the G has widened the safety net to include the sandwiched middle class and has even done away with means testing in some areas, such as pioneer generation benefits. Did this reflect a shift in the PAP’s ideology of democratic socialism, or was it a reason? How did it try to reconcile its words with its deeds and vice versa? Dr Jayakumar tried to join the dots.

I enjoyed the book immensely. For me, it brought back memories of political reporting in the 1980s and 90s. I recommend this book to all citizens, both old and young. The old because it’s a look back on memory lane and might answer some questions you might have had then about events and happenings. For the young because it’s not just a history of the PAP but a history of “recent’’ Singapore.

Keeping the Catholic house in order

The silence in Catholic circles is to be expected. No Catholic wants to recall  the sex scandal which led to the the conviction earlier...

Two key ingredients are needed for a solid interview to take place. First, the interviewee must have led an interesting life and have interesting...