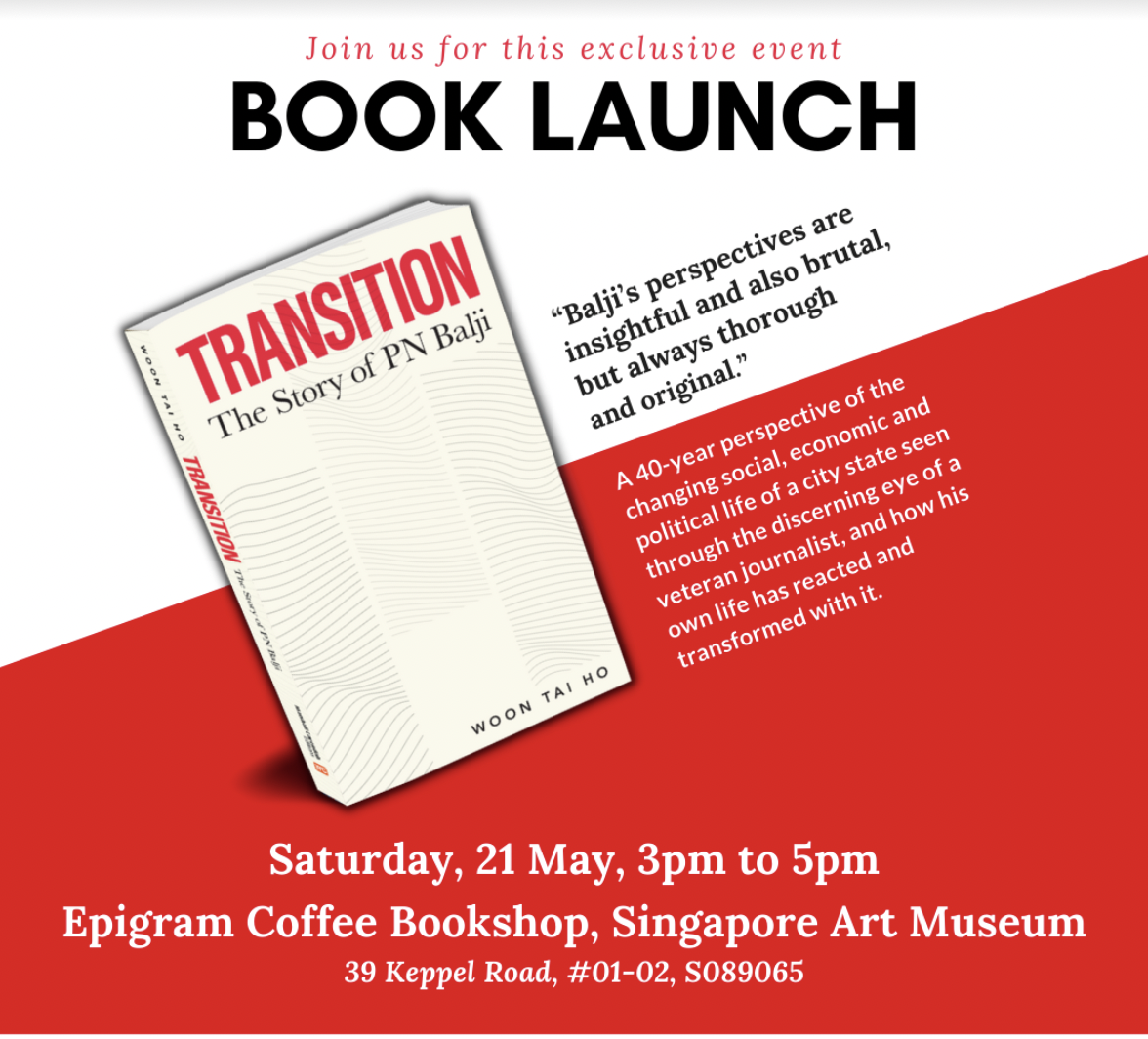 Two key ingredients are needed for a solid interview to take place. First, the interviewee must have led an interesting life and have interesting views he is unafraid to espouse. Second, the interviewer must have a breadth of reading and enough depth to tease out views that would be expressed in the strongest terms.

The Woon Tai Ho-P N Balji combo in Transitions, which will be launched on Saturday May 21, is a great example, with Woon easing Balji along issues as varied as his family life, respect for women, multiracialism and the 4G leadership.

Woon chose a writing style that reveals as much about himself as the man he was interviewing. What was striking was how he pulled together strands of his reading, whether of history or current affairs, to flesh out what Balji was saying. It was one of the more competent long interviews I have had the pleasure to read, with interesting asides on Balji’s demeanour, posture and habit of folding his arms across his chest.

I had wondered if this book would be an extension of Balji’s earlier Reluctant Editor, which focused on his journalistic career until he retired from the newspaper industry in 2003 when he was in his mid-50s. Were there more “secrets’’ he would tell? But no, this isn’t a book about the man’s storied journalistic life through the New Nation days, The Straits Times, The New Paper and MediaCorp’s TODAY. It was about how his ringside spectator seat over the years, including post-retirement, had shaped his views.

Woon put that quite clearly in his preface.

“Today, many of the early assumptions of Singapore are being questioned by an increasingly international and critical citizenry. This young country has looked within and asks, arewe on the correct path? Are there too many foreigners? Are we divided along racial lines? Is a one-party governed country what we want? Is the Opposition strong enough to keep the ruling party in check? Balji has been at the forefront of these questions, and here in this book, his answers are heartfelt and personal. He emphasises, often, that he is pro-Singapore, not necessarily pro-PAP nor pro-Opposition.’’

Nevertheless, there were deja vu bits, such as Balji’s admiration for former Singapore Press Holding’ editor-in-chief Peter Lim, who held the line on editorial independence despite Government pressure during his tenure.

A few other key events, such as the Toh Chin Chye affair, were reprised but in the context of his management style. Balji, then editor of The New Paper, was on vacation at the time in 1996. The company sacked the reporter and demoted two editors for reporting – wrongly – that the former Deputy Prime minister was being hauled up for drunk driving. Did Balji think this action was fair? Woon didn’t get a direct reply from Balji.  It was a paraphrase: Balji’s point was this: sack the editors and the paper would never be able to recover. In life, we make choices, and sometimes the best options aren’t out there.

Balji’s political views, however, are scattered throughout the 121 pages, which included some of his published columns. The book is part political and part human interest with many references to Balji as a husband, father and grandfather. It can make for disjointed reading for those who expected neatly arranged chapters on family life, work and post-retirement.

Personal insights into the man come through as he talks about the changes in values, whether within the family unit, in society or at the leadership levels. There is quite a bit about his own arranged marriage (including the wedding night!), and his relationship with his daughters and two grandsons.

This would probably not interest readers who only know him as a veteran journalist and commentator; it might well be distracting. But for me, this is where the Balji I don’t know surfaces: a sensitive soul rather than the hard charging editor I once reported to.

The book, however, isn’t only just Balji doing the talking. It is replete with interviews with people who know him both within and outside journalism.

Like others who have worked for him and with him, I agree with those interviewed about his “independent streak’’. As an editor, he made judgments about news reports from a purely journalistic point of view, not beholden to anyone or anything. Unlike other editors and those in top management, he doesn’t move within their circles playing tennis or golf. He kept to a “professional approach’’ so much that he wouldn’t take calls from management on a Sunday. He also “distrusted’’ministerial briefings and would send a representative in his place.  (In Reluctant Editor, he ranged a lot more on this point about briefings being a kind of gag on journalists).

I would add that from Balji, I learnt to front-edit, that is, decide on what would be the news focus of the day even before the day unfolds. It was about reporting “what our readers would want to know next’’, a tabloid approach rather than the broadsheet method of generally waiting for news to “happen’’.

Most interesting were his views on Singapore politics, especially the political leaders’ handling of the Covid-19 pandemic which he described as  “a lack of decisive leadership’’.

At the risk of over-summarising, I would describe his political views like this:

He is disappointed in the 4G leadership. No one seems to have surfaced among the rest to display decision-making prowess, especially during the Covid-19 crisis. (Note that this book was written before the anointing of Lawrence Wong). This indecisiveness permeates every level of society, which is obsessed with the materialistic “upgrading’’ mentality. Leaders are not in sync with the younger generation, and the People’s Action Party should treat the results of the 2020 General Election as a warning to work harder at winning back the hearts and minds of voters.

“From my perspective, Singaporeans are constantly reminded that, in a hostile world, only the PAP leadership has the experience and wherewithal to guide the Singapore ship safely to shore.

“The creative, questioning minds crucial to the new digital economy are not only absent from the political centre, but they are often ignored by it, or indeed, besieged by it. The political predominance of PAP group-think, its obsessive commitment to scientific technocracy to the exclusion of almost all other skill sets from the higher reaches of office, poses a threat to the long-term future of the Singapore society and economy.”

Balji returns to this theme constantly, citing groupthink as the PAP’s Achilles Heel. PAP’s efforts to recruit outside the usual military and administrative circles have come to nought because of its “selection’’ process which weeds out the non-conformists. Its pick of the political crop has been weaker and weaker.

He cites blogger Leong Sze Hian’s recent crowd funding success in paying off damages sought by Prime Minister Lee Hsien Loong in a defamation suit as an example of an out-of-touch leadership. Leong raised $133,000 in 11 days.

He asks who would make a good leader today and singled out one person, a non-politician. I decline to name him. You have to buy the book.

At one time or another, some of us would have had the same thoughts as Balji. How many, however, would have articulated them aloud and have them put down in black and white? Balji, at 72, has nothing to lose at this point.

There was something he said that resonated with me personally: How it was liberating to be able to speak/write freely without having to consider what others, like the company or the Government, would say. I count Balji as a commentator who has tried to push the OB markers, but not so much as to land him on the other side.

He pulled even fewer punches in this book.

Advertisement. Scroll to continue reading.
https://pagead2.googlesyndication.com/pagead/js/adsbygoogle.js?client=ca-pub-6588922561575109
In this article:featured, journalism

What other sexual subcultures should we know about then?

I’ve always like The New Paper. It’s a feisty thing. With gutsy reporters who dig deep. For dirt, sure, but also facts. It tells...

A big fail of a story

This post is for those interested in journalism or those who fancy themselves “professional’’ readers. I am putting this up because I don’t understand...