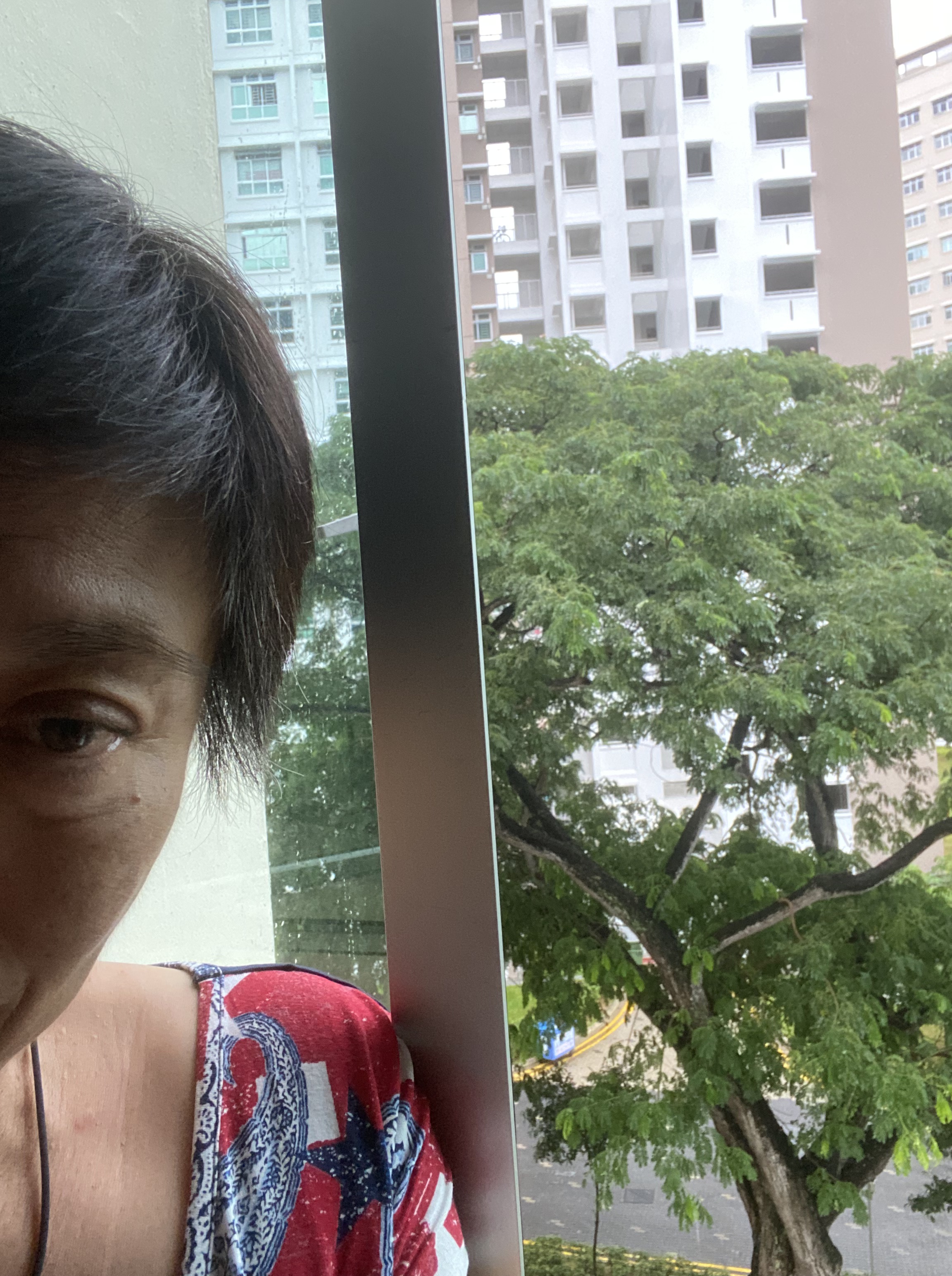 A friend was gobsmacked to hear that I had moved from my condo apartment into my mother’s HDB flat. He’s an HDB upgrader who moved into a condo a few years ago and was looking to buy a piece of landed property.

He asked if someone as fastidious as I am would be happy rubbing shoulders with the hoi polloi. I found his attitude curious. What’s not to like about living in a place where the town council and the HDB is on call to fix a problem? Where service conservancy charges are usually “rebated’’ and fixing broken structures subsidised? (Except that you might sometimes have to get your neighbour to share the bill to repair a leaking ceiling). As for the poor, huddled masses that was his perception of HDB folk, well, I am one of them. Unapologetically.

I would have made a good poster girl for any campaign on “moving from Third World to First’’ – until three years ago. In my life-time, I have moved from a zinc-roofed wooden house to a rented terrace house to a rented corner terrace house to a fully-owned five-room HDB flat to an old private walkup apartment before becoming the owner of a brand new condominium apartment. I stayed in the condo for more than 10 years. Unlike some residents, I made full use of the gymnasium, swimming pool and spa, and paid the $1,000 plus quarterly management fees willingly. It was also a five-minute walk from the old HDB flat where my mother lived, and where I had spent much of my teenage life.

I moved back to the old HDB flat to keep my mother, who lives alone, company. It was also a ploy to get her to agree to the hiring of domestic help – a condition I had set for moving back in. I had worried for some time about how she was risking a fall while doing the sweeping and mopping.

I said “toyed with’’ as I had never considered it seriously.

I didn’t want to pluck my mother, who is 76, out of her familiar surroundings. I know she feels the same way too when she talks of elderly neighbours who “die early’’ after moving out. The more prosaic reason, however, is that her HDB flat is bigger than my apartment. Both are three-bedders, except that I had knocked down a wall to combine two rooms for a master bedroom. She has a balcony. I have a planter box.

Older folk can probably recall  the days when HDB flats were big and airy with the apartment blocks spaced well apart. The car park was “downstairs’’ and not in some far-flung multi-level carpark. The five-room flats of old were 117 sqm. compared to five-rooms now at about 110 sqm.

The flats of old were just blocks in a block, which is the most useful configuration for any aspiring interior designer. My condo apartment, for example, had a triangular corner room which could barely fit a single bed.

These days, I pity people who pay so much for so little space in something “private’’. But I guess this is made up for by having a non-HDB address and, as my friend says, not having to contend with the likes of HDB folk and the inconveniences of public housing.

I called him a snob.

What HDB folk anyway? The man in shorts and singlet? The little old lady in a wheelchair pushed along by a foreign helper? The people who babble in various languages and dialects at the coffeeshop? The tattooed guys puffing at the smokers’ space? The kids in school uniforms who run or cycle into you?

I think living in an HDB estate is a wonderful manifestation of the Singapore way of life. There are all sorts of people, yes. I call them the earthy and authentic sort, with few pretensions. They are comfortable in their own skin, rubbing along with fellow citizens who share the same space.

Of course, there are the gangsterish sort as well. But I have learnt a long time ago that looks can deceive in HDB land. Looking scruffy doesn’t mean badly-mannered. Girl with purple hair does not mean “cannot speak English’’. Man in a long-sleeved shirt also takes the bus. I have been mistaken for the hired help.

By virtue of being neighbours, there are conversations in common – like complaining about not being able to do the marketing on wet market cleaning days, bearing with noise from a nearby construction site or discussing the quality of vegetarian bee hoon served by the newest stall holder.

And if you have stayed as long as my mother has in the same place, you refer to young adults by their embarrassing childhood names, commiserate with former working adults now confined in wheelchairs and have the cellphone numbers of the fishmonger, pork seller and dry goods owner to reserve the freshest and the choicest of their wares. My mother cannot leave the flat without meeting someone she knows.

Would I call this kampung living? Based on my own experience, what’s missing is the kampung habit of walking in and out of other people’s homes at all times of the day and night. HDB folk tend to be protective of their living space. They might tell each other which block they live in, but not which flat. Gifts during festive seasons are exchanged at the door. Conversations take place in public spaces. To people who say that HDB living doesn’t bode well for privacy, I say, just shut the door.

The HDB estate is a great social leveller. It doesn’t matter if  you live in a three-room or five-room flat, or whether your flat is in a new BTO block or 50 years old.  You’re still a HDB dweller who goes to the same wet market or supermarket as everybody else. I think most HDB dwellers believe that the luckiest residents are those within walking distance of amenities – and they could be living in rental flats.

And what is this about inconveniences?

The corridors are clean and the lifts work. The grass is mowed and the trees trimmed. If I need to dispose of something bulky, I just wave down the ever-present cleaning supervisor to cart them away from me. Posters at lift lobbies keep you up apprised of important happenings, like dates for collection of masks. Void decks are not always void. They have vending machines and  house numerous agencies delivering services for residents, especially old folk and children.

If something goes wrong in the estate, the town council, well aware of the political nature of their work, sees to making everything all right. The town council folk manning the hotlines, those whom my mother and I have encountered at least, have the patience of Job. Likewise the HDB folk, even if they aren’t responsible for certain estate matters anymore.

In a sense, I have delegated matters regarding my living space to someone else. How unlike the years when I have to decide whether to agree with the condominium management committee’s call for funds to repair something or other, or whether a household should be allotted more than one parking space. Yes, I am allowed to be lazy in an HDB estate – because others have been hired to do the thinking and doing for me.

I am not saying this just because I am being paid to write this. I truly believe that HDB living is remarkable. Note that I said HDB living, not HDB policies. But once you’ve got a flat, and if it happens to be located in a mature estate, I don’t think you would be immune to the charms of a HDB lifestyle.

I think about the five years or so I spent being sequestered in my old River Valley walkup, with too few dining or lunch options and supermarkets that require you to get there by car or public transport. It might be nearer the glitzy Orchard Road area, but you don’t go to Orchard Road all the time do you?

Perhaps, I have a romanticised view of HDB living. Perhaps, I am inclined to extol its virtues because I now live in an HDB flat. I admit that there are some things I miss about condo living besides the swimming pool and the gym. I used to have an unobstructed view of planes, trains and ships at sea because my apartment was on top of a hill. I never tire of looking out at the sky at night, wondering if the two pinpricks of moving light would collide. For residents with a car, there’s free covered parking – unless you figure that this is all part of maintenance fees.

Today, I have a view of the inside of several homes because new blocks have taken over the open-air carpark in front of my block. I have to crane my neck out of the window to catch a square of sky. But I also wake up to the sound of birds outside my window, nesting in a tree that has grown up with me. I swear I would kick up an almighty fuss should someone have any bright ideas about chopping it down.

It has deep roots here. As have I.