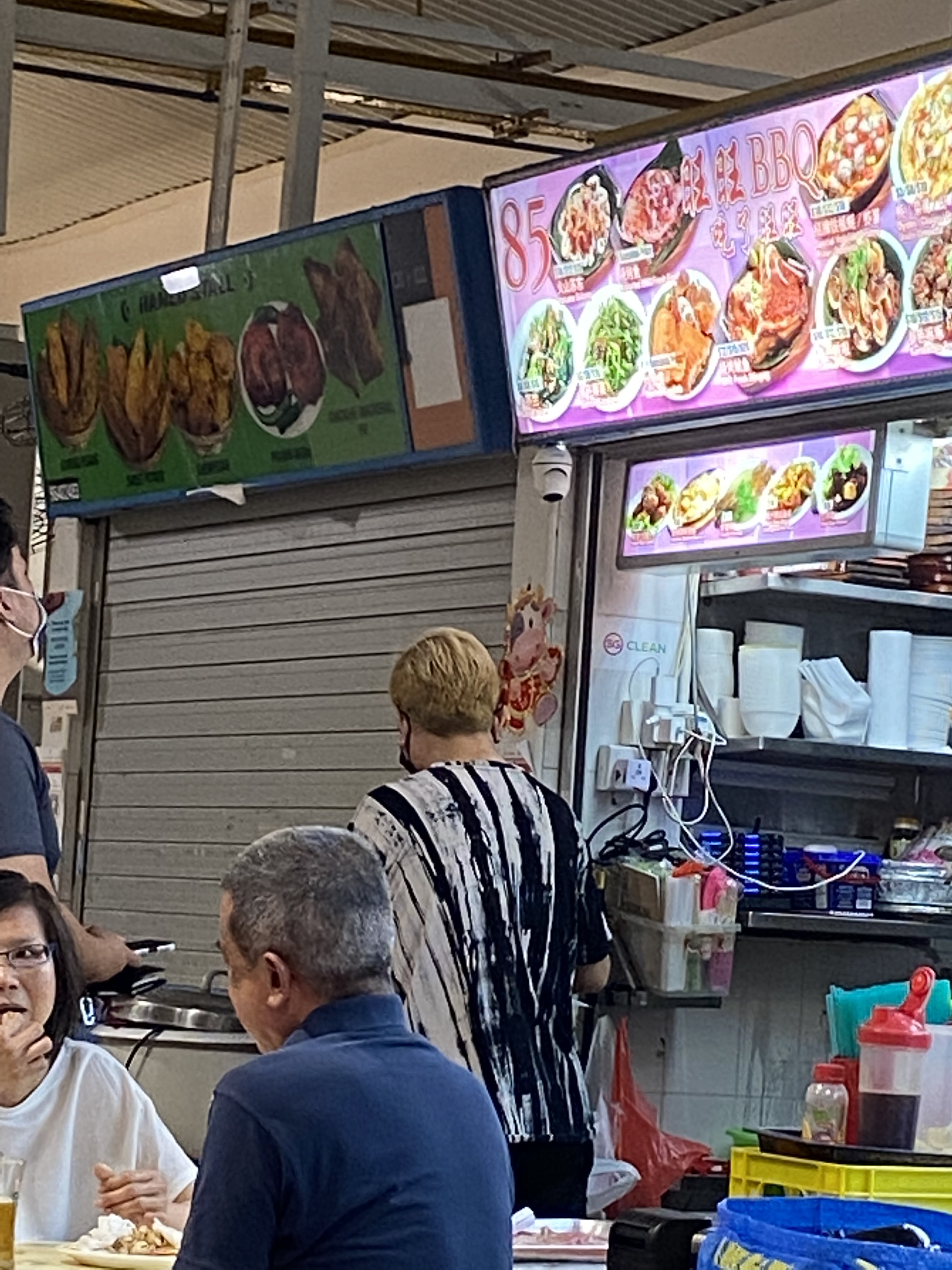 Any taxi driver worth his licence will know where Fengshan market is. After being apprised of the destination, the talk in the cab invariably turns to its food offerings. I have often felt like a food guide, telling them which stall has the best grilled chicken wings and which of the handful of bak chor mee stalls to patronise. Sometimes, we will get into a little argument about whether the Chai Chee pork porridge stall serves porridge that is “too oily’’ or whether Fei Lao’s hor fun is really worth the money.

The hawker centre is different by day and by night. Most “outsiders’’ know its night-time incarnation. After 6pm, the hawker centre starts getting crowded with foodies from other parts of the island converging for dinner or supper. The centre takes on a different aspect at night – smokier and smellier because of the Newton Circus-like array of grilled seafood stalls that operate only in the evenings.

You don’t see many residents eating there at this time, as most prefer to tar pao so as not to get the smell of food on their clothes. I can’t figure out why these stalls are so popular with “outsiders’’, when they seem to differ only in terms of the quantity of chilli infused in their offerings.

The “locals’’ have the inside track, so to speak. They know where (as well as when) to go for cheap and good food. They queue up at 4.30pm for the satay bee hoon seller to open his stall, knowing that he closes by a very early 8.30pm. They know the stall where a PRC couple sells xiao long bao at $5 for six pieces (used to be $4) made on the spot, tasty enough to rival any brand name Chinese restaurant. They know where to get a one meat-and-two vegetables plate of economy rice for $2.20.

They also know that the hawker centre is not a place to go to for halal food. There is only one stall at an extreme corner of the centre which sells Indian-Muslim fare – and that popped up only a few years ago. I once spied a group of young Malay men and women looking blankly around them in the crowded hawker centre late at night, evidently searching for a halal stall. With a slight sense of embarrassment, I pointed them to the coffeeshops which all have at least one Muslim stall, and to the sole Indian/Muslim coffeeshop which opens 24/7.

If there was a variety of food fare, I would say this hawker centre (not just the concept) is well deserving of the UNESCO food heritage award. But its mainly Chinese fare has kept a significant proportion of residents out of sight.

I wondered if this is due to commercial practices (that is, high rent) and whether some authority is keeping tabs on the culinary variety on offer. My MP Cheryl Chan told me that it had nothing to do with the rent. Although three stalls had been set aside for halal food, none had ever managed to make it a going concern despite deliberately low rents set by the National Environment Agency. I hope the current one is a stayer.

Of the rest of the 200 stalls, Ms Chan reckons that 70 per cent of them are run by first-generation hawkers, the lucky ones who pay low rents. They don’t seem to have changed hands very much. When I checked the tenders put out by NEA calling for bids for stalls from the start of this year, only one (for raw or processed seafood) was in the offing. It is just as well that the NEA stepped in in 2012 to stop stallholders from sub-letting or assigning their stalls to anyone who wants to pay them for the space. Before 2012, stalls in popular hawker centres could change hands several times at higher and higher prices leading, of course, to higher-priced food. Hence, the oft-heard anecdote of the Rolex-wearing, Benz-driving hawker.

The current system is for joint ownership of the stall for three years. If hawkers want to transfer their stalls to someone else, they can do so only if they have a familial relationship with them. Hence, the angst about children being unwilling to carry on their parents’ hawking business. With unwilling heirs, the stall then reverts to NEA to be tendered out again.

I’m glad that there’s not much stall turnover in my market. An elderly couple who sold chee kueh passed the business on to a son-in-law. The couple used to operate the stall only in the mornings, but the younger man has the stall opened throughout the day, with more offerings. A few others have had their adult children helping them out full-time for so long and that it doesn’t matter who holds the tenancy agreement. Most of the wet market stalls are also family businesses with spouses and siblings chipping in to help.

For a few old-timers, Covid-19 was a death blow. My favorite zi char man who has been taking orders on the phone for self pick-up way before these pandemic days, moved to Bedok South. Replacing him is a stall that sells oyster cake, the sort you see in Chinatown. It’s a novelty but I don’t think it’s catching on.

The new-ish has made inroads too. There is a stall selling baked buns that is in direct competition with the three confectioneries in the surrounding shophouses. The thirty-something husband-and-wife team bake on the premises, which I think means much lower overheads for them compared to the confectionaries with their hired hands. So long as the buns are cheap and good, they will always have customers. Just last month, they branched into selling nonya kueh, again in direct competition with a big-named nonya cake shop nearby.

Like the blocks, the market-cum-hawker centre has gone through several renovations done by the town council over the years. It closed for a whole year in 2012, and residents had to contend with the temporary premises set up next to it. The last big one was completed in June last year, just in time for the GE2020 election which got underway at the same time. Now the centre has high ceilings and more fans on the pillars. The stalls have brand new signboards and the floor of the wet market area is somewhat drier than before. To the chagrin of smokers, the eating areas are smoke-free. To the satisfaction of everyone, the toilets are clean enough to do both big and small business.

The centre’s re-opening was fortuitous for the People’s Action Party because residents had had to live without the centre since February last year. Covid-19 lockdowns meant a stoppage of renovation work which was supposed to have been over by the end of April. I can imagine the irate complaints of residents if PAP candidates go to them for the vote against the backdrop of a closed market centre.

I noted that Non-Constituency MP Leong Mun Wai raised a worry in Parliament recently about the invasion of “foreign’’ food in hawker centres. I suppose he was referring to pasta, pizza and other western stalls? Or was he thinking about those selling Thai, Japanese or Korean food? Or was he talking about Chinese cuisine of the Szechuan or Pu Tian kind?

I was disconcerted by the question. Better to have a variety of food available to the HDB heartlander at a cheaper price, than having to pay a bomb to eat the same “foreign food” in air-conditioned restaurants. I think that he should make a case for a greater variety of “local food’’ in hawker centres that go beyond the ubiquitous wanton mee, fishball noodles and chicken rice stalls. It is more difficult to find stalls which require more food preparation and ingredients, such as kway chap or even nasi padang.

It’s not the food that makes the hawker centre, it’s the people who sell the food and those who eat it.

PS. This article first appeared on mynicehome, a HDB site