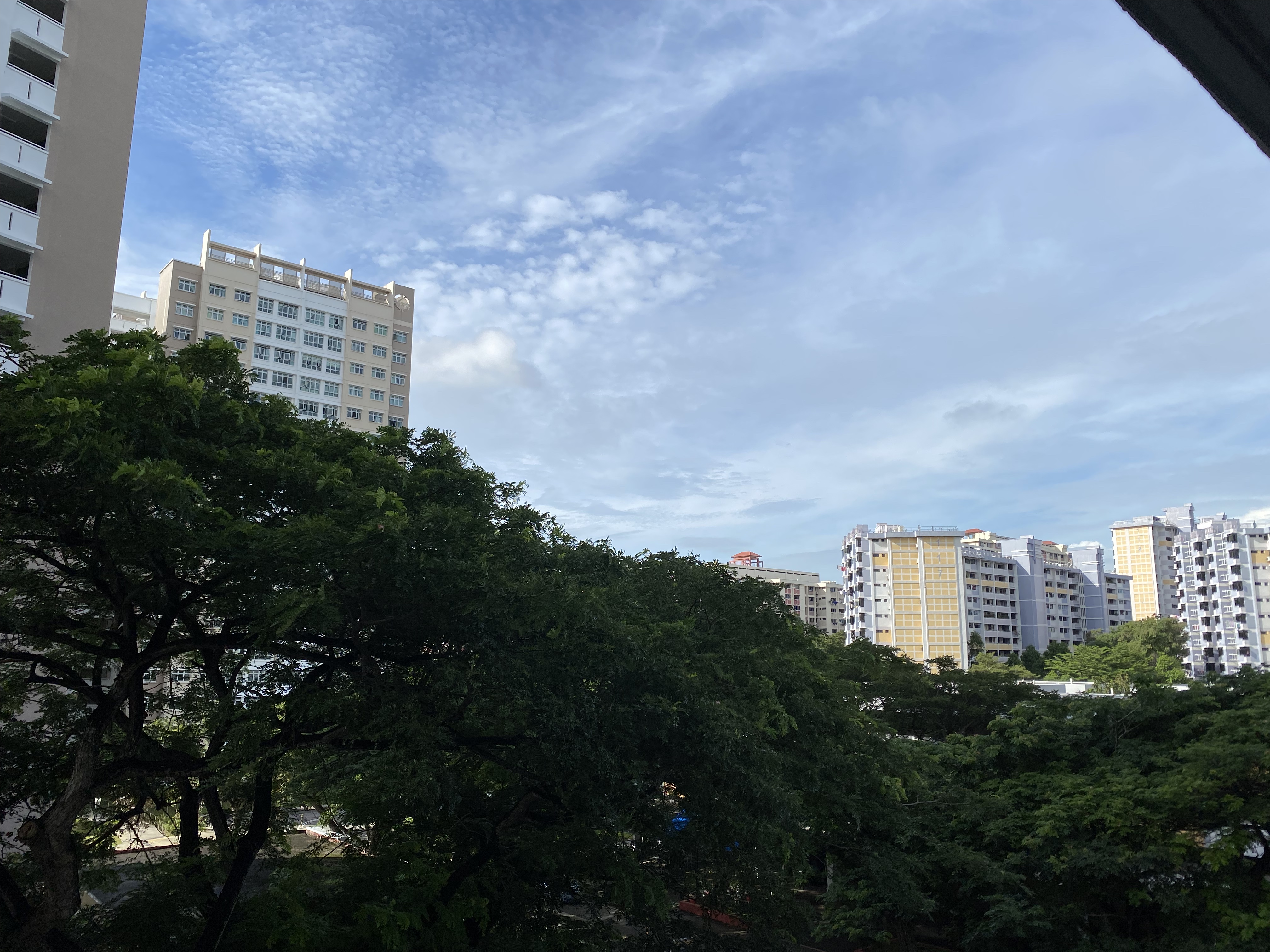 I didn’t pick the right time to move into my mother’s flat. Just after I was settled in, the HDB decided to construct 8 new blocks right across mine. The open-air car park had to go, to the universal dismay of residents used to parking “downstairs’’. The new blocks would take up a huge swathe of the car park and extend to an open patch of green where a large L-shaped block used to stand. It was demolished some years ago as part of the Selective En bloc Redevelopment Scheme (SERS).

For three years, the din, dust and dirt invaded the flat. Our next-door neighbour, upset at the upcoming obstruction of the view, moved out into a condominium in Pasir Ris. The couple had checked the HDB maps and were convinced that they would be able to see into homes in the new blocks when they were up. They were more upset about the vice-versa scenario. My mother and I simply decided to install thicker blinds.

Of course, residents monitored the rise and rise of the blocks closely, wondering how far away the new multi-storey car park would be. We had an interesting time pointing out which block looked like it contained two-room flats and which block had the biggest flats, although a look at the HDB website would have told us. And we snickered when a new signboard came up to announce that this precinct would be known as Fengshan Greenville.

This wasn’t the first invasion of the new. 10 years after my family moved into the area in 1977, the HDB decided to build a few blocks of executive flats nearby. My parents wished heartily that they had been available earlier; they were much bigger than our five-room. Then 10 years after that, a fancily named Vista 8 precinct was built right in front of the main New Upper Changi Road, mainly for residents who had to move out of blocks in the estate because of Sers.

The lay-out of the newest precinct, Fengshan Greenville (sniff), and design of its flats appear to mimic “private property’’ standards, with centralised playgrounds and an array of confusing pathways that lead to dead ends. I was told to look down for different tile markings that indicate access, but I don’t think people look down when they are looking at where they’re going.

It’s HDB, so it’s not quite a gated community but it isn’t easy to enter the precinct without feeling like you’re trespassing. And when you do make it into the hallowed grounds, you’ll find it tough to locate the block because you don’t know if a Block 1C is followed by a Block 1D or Block 2.

Each new block has a mix of flat-types, including studio apartments and two-roomers. There’s also a light bulb outside the smaller flats, which are usually occupied by the elderly. If it’s lit up, it means someone in the flat needs help. I thought that was a pretty nifty idea. I think it should be part of the Home Improvement Programme (HIP) to cater for the elderly in the older blocks who remained after their children flew the nest.

I also like the idea of blocks with such mixed flat-types rather than confining, say, old people into a block of studio apartments – which used to be the case. The rental blocks, however, are still known as rental blocks although some households might have bought over their spaces. There are four such blocks in my neighbourhood. They aren’t grouped together but scattered in 2 areas.

The trouble with new residents, however, is overcrowding. While the number of residents has increased, the number of shops and stalls remain the same. The roads and pavements can only be so wide and parking spaces for the visitors to the market remain limited. There’s a lot more honking in the neighbourhood because there will always be idiot motorists who think they can stop their vehicles along a one-lane street.

Perhaps, Covid-19 will change some people’s eating habits permanently, with more people ordering takeout and doing less marketing. But that would take away a lot of the essence of HDB living, with people of different races, languages and religions rubbing along together in a social setting.

Despite the infusion of new blood, the neighourhood is still pretty elderly with about 30 per cent of residents over 60, so MP Cheryl Chan thinks. But it’s good to see some prams and strollers on the pavement besides wheelchairs and walking frames.

I have often wondered who would give way if the wheelchair-bound came face-to-face with a parent with a pram along a narrow aisle (it’s the parent with pram.) It’s more interesting to watch what happens when the wheelchair bound come right up against another. Both sides would insist on making way for the other causing a traffic jam on the pavement. It can be quite hilarious.

There is no lack of help when someone gets into a jam in the neighbourhood. Cars slow down for the elderly to jaywalk across the road. Able-bodied men offer to push the wheelchairs of those who are also laden with the grocery shopping. Once, I saw a couple of men lifting a wheelchair-bound woman over the doorway into a beauty salon.

Ms Chan told me that an audit of the elderly-friendliness of the estate is in the offing, as part of the East Coast plan (yes, that East Coast plan). It’s about time. I hope the town planners have standard parameters on gradients of slopes so that wheelchairs don’t turn into getaway cars. I hope they know that those pavements with inter-locking red bricks are a bone-rattling pain for the wheelchair-bound although they might be aesthetically pleasing. Give me a non-slip concrete floor any time!

I was also told that there will be an overhead bridge equipped with lifts linking people to and from the market centre across Bedok North Road. That, too, will be much welcomed by pedestrians and motorists who now endure an interminably long wait for traffic lights to change colour.

When the Build-To-Order (BTO) blocks came up, residents in my block lobbied hard for a covered shelter-cum-drop off point. I mean, we already lost our car park, the least we could have is a shelter. We got it. For free, of course. As I’ve always maintained, what’s there not to like about HDB living?

One “old’’ neighbour, however, is being sorely missed. That is the OCBC bank branch which has been in place for more than 30 years. Almost all first-generation residents do their banking there, growing old with a couple of the tellers and the security officer. Right to its last days in June, in the midst of the pandemic, there were still queues outside with the elderly waiting to get into the bank to do their banking. Chairs were thoughtfully put out for them. I believe they find comfort speaking to a bank officer who can help them with simple things like using the ATM machine to withdraw cash or to help them with some banking paperwork.

With the bank gone, there is only one ATM machine in the neighbourhood. I have seen, too often, old people standing in front of it jabbing at the keyboard, flummoxed when nothing happened. Strangers would help them with the menu, while looking away when passwords are being keyed in. I thought that this exercise would be easy enough to learn to do until I was told that it was because they simply couldn’t see the small numbers and words on the screen, no matter the language. It’s time the private sector too did an audit of their services for the elderly.

Or just come back and set up the bank lah.

PS. I wrote this for mynicehome, HDB website. This is second last column. If you like this, please share …so I get paid to write some more!